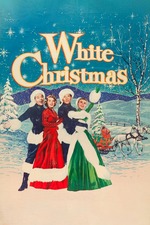 One of the few mainstream Christmas films I'd yet to have seen.

White Christmas is barely a Christmas film actually. Instead it's a totally commercial, unapologetically sappy, totally unoriginal show musical. And it's a decently fun one.

Crosby and Kaye are both fun to watch. The chemistry is excellent, even if the one-liners are just OK and there's a virtually total absence of visual comedy. The women are not so great in the old acting department (I swear to God Vera-Allen looks at the fucking camera upwards of 20 times), but they're great at singing and dancing, and that's mostly what they're doing, so what the hell.

Vera-Allen's dancing is actually probably the most enjoyable part of the film. When we're allowed to just sit back and marvel at her footwork it's a hell of a lot better than pretending the plot is anything of consequence or that the general's character has been fleshed out at all or that any of the music outside the title track is worth a damn.

That's not to say the songs are bad. But they also aren't very catchy or lyrically impressive or necessary to the story.

At a runtime of exactly 2 hours, White Christmas isn't exactly brisk, but it's not really slow either. A mid-burner, if you will.

Essential Christmas viewing? Not really. It's easy to forget it's got anything to do with the holidays for the majority of the viewing. A great film? Nope. Not bad, but definitely a long way from "great." A decently fun musical that isn't a total waste of time? Absolutely.