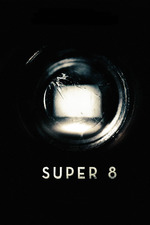 Me, as a sick big fan of the Lost series created by J.J. Abrams, have never paid attention to his filmography, so i decided to start with the one that doesn't belong in any saga or trilogy and as it were, a film independent itself.

Nostalgia is the fuel and the camera is the transport of this feature, taking us back to a time when the mood, construction and completion of popcorn movies were very different and who doesn't understand where Super 8 sucks their ideas, probably won't buy your journey either.
More naive and adventurous, he embraces Abrams' memories by recreating, from the title, his boyish inspirations; his cinematheque and the 8mm films he made to compete in the city's festivals.

Development is silly, cliche, but that's the idea. It feels like the movie does it on purpose, that it wants to be that way. There are no cell phones (kids communicate through walkie talkies) and no iPods (it's the beginning of the walkman era), no big fighting, not much shooting, no electronic music, what we have is tight and colorful clothes, friend chubby, crazy and dumbest, the girl everyone wants to walk hand in hand (well into the early 70's, so Steven Spielberg is in production), the family drama, the final redemption, bright lights against the camera , lots of smoke, keyboard soundtrack and repeating: Nostalgia is the strong point!