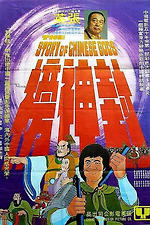 The Story of Chinese Gods

Had been wanting to watch this movie for a long time, but only got around just now after finding a print that doesn't turn its scope aspect ratio into an atrocity. This film is notable for being Taiwan's first animated feature and the only (to my knowledge) animated Brucesploitation movie given one of the gods in it is modeled after Bruce Lee (with nunchaku and everything). Simply put, it must been seen to be believed. It's like if Ed Wood had directed a wuxia film for Terrytoons. The movie is one of those action movies best equated to a porno because while you watch it for the action scenes, everything else is mostly intolerable. I saw it in English, but I'll be damned if I could provide a plot synopsis for this thing. Hell, it's weirder and trippier than anything Adult Swim programs late at night for a stoner audience. That said, the last half or so is all action so it's pretty damn entertaining with fights that are part live-action kung fu movie, part FIST OF THE NORTH STAR, and part Popeye. The editing is schizophrenic, the animation frame rate is inconsistent, and the 180 degree rule is broken as often as character's limbs. Boy is it still fun to watch though.