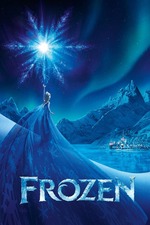 I never imagined that a recent Disney film would make its way to near the top of my Disney Ranked list, but Frozen is one of my new favourites and I can't stop singing it.

A retelling of Hans Christian Anderson's The Snow Queen, Frozen follows a story about how the legendary Snow Queen came into her powers and own isolation. I knew very little about the film before going in to see it, so realising what it was about, I was immensely impressed.

It's a wonderful story of sisterhood, true love and friendship, one that I found incredibly refreshing. But not only is the story charming, the settings and animations are also beautiful. The themes of snow and ice making a stunning backdrop, and also allow the introduction of new Disney characters including a snowman, a reindeer, and... some trolls. The snowman is especially funny, but each of the animals, as well as a few supporting characters, have a great personality to make them stand out.

Most of all, I was blown away by the singing talents. Idina Menzel and Jonathan Groff, who are both known for their roles on Glee as well as their theatrical performances, are phenomenal. Kristen Bell's voice-work as Anna was a wonderful surprise, too, and I find Josh Gad hilarious.

The musical numbers are now some of my favourites and I haven't been able to stop listening to the soundtrack since. This is just one of those films that really sticks in your head, and, for me, it's one of the best films of 2013.

The Adventurer: The Curse of the Midas Box