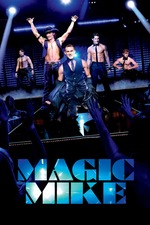 "Magic Mike," Steve Soderbergh's stripper-with-dreams comedy, is a stylishly shot, mostly upbeat film that tries to be a crowdpleaser. A currently charismatic Channing Tatum grinds his way through a story that is familiar and somewhat entertainingly executed, but, ultimately, is flat and full of empty flash.

Though there are laughs to be had, and the film moves at energetic clip, "Magic Mike" does not have the narrative it needs to make it widely successful. Characters and characters arcs are underveloped, leaving more suggestions than fleshed-out journeys. Though this may work in Soderbergh's more esoteric fare, here, where broad, popular entertainment is at a premium, it feels undercooked.

"Magic Mike" does have entertainment value, and there is a romance that is subtly rewarding. The Soderberghian conventions on display (faded yellows, etc.) are always watchable, and the chiseled abs and pecs are sure to please a large segment of the film's audience. As a well-rounded story of friendship, mentorship, and dance, however, the film doesn't quite pass.