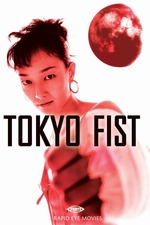 The first rule of Tsukamoto's Fight Club is: do not date unstable women with a thing for extreme body art. The second rule: bring extra towels, you really gonna need them for all the sweat and blood.

Once more, Tsukamoto is interested in human beings transforming into something else. While the two men try to transform from inside themselves the woman is doing it just in the outside of her persona. Sex and violence as our prime instincts, both as catharsis for the mundane and miserable existance we have to endure. Pain and orgasm dance in a very thin line that separates them. The city seems alive and is trying to eat it's characters, and then spits it's remains so they can rot in some back alley.

The violence is not suppose to be realistic or exciting, it's suppose to convey the exact emotions you get in a fight. The adrenaline pumping into your heart, numbing the pain. At the end each character has indeed transformed, but into what?