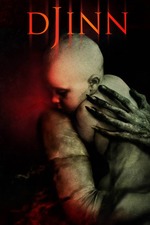 I watched two revolutionary films from this decade: WOLFRAM and DJINN. Tobe Hooper was an old man and his last, most radical film was sabotaged, kidnapped, buried... And nobody cares.

This was an unpretentious message to a friend. One who cares.

DJINN is an infinite source of inspiration in these somber days and I will stay talking, writing, keeping notes about it for as long as I can.

Like INVADERS FROM MARS, it's the nightmare of being awake, conforming to progress. The nightmare of progressives and reactionaries. You can't escape who you are, where you came from, what's around you. It's the dream of another life, a perversion of what's always been there, and the characters are forced to live with it forever. The lullaby never puts the scared child to sleep, it calls him back to the ruins. The buildings and structures stay for those who know them. "If you don't get away with sunrise..." It ends with the sunrise. Everything is still and dead in the desert. Natural light swallows electric light and the lullaby still wails. Sublime. It won't get so soon out of my mind.