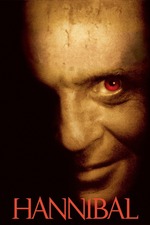 One aspect that makes Hannibal quite exceptional, and that should probably be credited to David Mamet's initial involvement, is its structural concision and the acceptance of those figures as archetypical, preventing the subtextually charged material from becoming too literal on the screen, from overly psychologizing the procedures (as did Demme's The Silence of the Lambs). Scott makes a clever choice in emphasizing the abundant references to the long Italian tradition in representations which blurry the line between horror, beauty and the grotesque, associating it with the narrative's batshit grand guignol and occasional discussions of the philosophical or theological implications behind those prevailing images, in the entire city of Florence, as ignored as the people living in it (there is a moment in which a man is murdered in a crowded street, someone looks, but nobody stops, and the policeman can wash his bloody hands in public as if nothing happened, the subsequent killings, even of completely unimportant characters, are given the same unusual attention).

The lost interest in the underlying values of those works reflect a much larger problem, as all institutions are shown to be corrupt and lacking any ethical basis, maybe everyone, as the scenes mentioned above could suggest. Therefore, Giannini's death scene is fundamental, not just cheap, gratuitous violence. A disemboweled body appears hanging from a balcony, a group of tourists immediately laugh at the incident, then screams are heard and a final shot of the square shows the bystanders perplexed with the view. Suddenly, the representations become a bewildering and horrendous spectacle in flesh and blood, and a forgotten, subconscious understanding of such problems clash into the surface.

In America, the invasion of the modern world by these displaced and almost mythical expressions is even more overt. The same kind of acknowledgement is made in the neo-gothic figure of the villain and his surroundings, portrayed as a deformed monster living in a recluse castle, with faithful servants (the police included) to do the dirty work, in short, Dracula, while Hannibal fancies himself as some sort of savior (and yes, Christ imagery follows), an outlaw punisher who desires the incorruptible purity he sees in Clarice Starling. Their relationship is explicitly related to Beauty and the Beast, to Tristan and Isolde (Wagner's overture is quoted on the soundtrack at the final encounter), thus, having a deranged love story between investigator and murderer told as a violent fairy tale at its center, it becomes easier to see the parallels with the gialli.

Hannibal's inheritance from Dante Alighieri is the same of Mario Bava, but it doesn't mean Scott tries to simply emulate the Italian masters, which is impossible to anyone who takes the genre seriously, for they are essentially works of criticism. Bava, Sergio Martino, Dario Argento, Lucio Fulci were all film/art critics, none of their best work should be considered mere reproduction, and I think Scott does something very close here, besides the clear awareness of their common aesthetic principles, which is probably what motivates the departure from his vices in other more stylized efforts, oriented by static and saturated images, as opposed to Hannibal's more harmonious movements, elegant camera work and gorgeous use of chiaroscuro lighting. And even Hans Zimmer's main theme sounds like a nod to Goblin's Suspiria.

Hannibal must be the director's greatest accomplishment since Blade Runner, and I hope it gets the same critical revaluation after the general dismissal of the film upon release. And to think that something this risky, an outright insane black comedy, constantly refusing to play safe, was put out as a blockbuster by a major studio, with big stars, and done by a director who is far from willing to take big chances most of the times, only 14 years ago... A production like this is unimaginable today, and that is really sad.