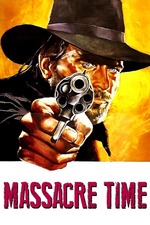 Le colt cantarono la morte e fu... Tempo di Massacro (also known by the less spectacular English titles Massacre Time, Colt Concert or The Brute and the Beast) is the first western directed by Lucio Fulci, breaking a long series of comedies (some in the mold of other genres, such as the musical and the spy movie) he helmed between 1959-1966 and also the first film (among those I managed to watch) in which the material allowed him to handle elements that characterize a good portion of his subsequent work. It is surprising how developed and mature are the forms Fulci presents at this point and their enormous precision elevating a rather simple script written by Fernando di Leo, a veteran in the genre who at the time had already contributed to the films of Sergio Corbucci (Navajo Joe) and Sergio Leone (uncredited in A Fistful of Dollars and For a Few Dollars More) and is mostly known today for directing classics of the poliziottescho like Milano Calibro 9 a few years later.

The vision of the old west in Tempo di Massacro is marked by the same ideas that will become constants for both and the initial minutes could not introduce them in a better way: First scene, Junior Scott (Nino Castelnuovo) commands the release of a prisoner to become the prey of his dogs, for a group of sadists to observe. The victim, who can barely run, is caught and devoured when reaches a river. After the attack, the blood merges with the running water and during the opening credits we follow its supposed course until the point where Tom Corbett (Franco Nero), the protagonist, is extracting gold, far from the area where the hunt took place. There, Tom is contacted by a friend from the city where he grew up and is handed a message requesting his return home, without any other information.

In addition to setting perfectly the atmosphere that dominates the whole picture and the narrative premise very concisely, recurring only to montage to give us the relation between its central characters without any action connecting them, these opening scenes reveal another aspect of interest, initially a trivial detail that indicates something basic for Fulci's staging, which is elaborated further. That is in the way Tom and his friend meet; this scene begins with Tom in the foreground and centralized in a frame that values the empty space around him, without any visual contact with the friend that approaches from the background and, after a cut, the camera, on the same axis, continues to follow this movement in the background with a slight panoramic, when Tom notices the presence of another person, only then heading to the shot in which the protagonist assaults the man who walked towards him, they finally establish eye contact, recognise each other and the reason for the meeting is revealed.

Fulci maintains this logic of composition throughout the film, making always clear the actions both in the foreground and the background even if some may be completely irrelevant to the narrative. The spectacular fight scene at the bar is the moment when this idea is given more meaning, as we accompany Tom approaching the bar, several shots are stretched to capture only banal attitudes until they are suddenly broken by some violent camera movement that reveals henchmen of the Scott family besieging him (like in the first appearance of his friend, even before the scene commented on the previous paragraph). Upon entering the bar, conversations of extras with no importance whatsoever fill most of the frame and the soundtrack, leaving the scenic movement that interests us almost relegated to a detail (in focus, but minor in proportion) in that place the director is keen to define integrally, because just the presence of those characters in this limited space is enough to generate all the tension and consequent aggressive reaction. Up to this part of the story, Tom could not get any explanation regarding the message that made him return and does not understand where the inhabitants stand before the local problems. But the violence becomes inevitable, because every motion directs those men to confrontation, even if their positions are still undefined and, as we see later, some are fighting for the same objective, after all, it is one of the henchmen who defends him.

The above example is just one of the ways Fulci articulates the impetuous determinism of the world he depicts, for this is extended to the entire film and there are many others worth mentioning: A wide shot of the hero approaching the ranch of the enemy turns into a detail shot of a distant rifle through a simple displacement of the shooter, who is promptly killed by a third man left offscreen before he can pull the trigger; the brutal whip duel, refusing to give the same attention to detailed movements that are, until that point, the director's preference, privileging the results of the combat, nearly freezing the frame when it shows a wound or dilating time while we see the man trying to recover; the short period of respite after the duel, inside the brothers' house, where the old woman, treating the injuries, is murdered by horsemen who appear and disappear abruptly through the window; and the fight between brothers after the unexplained death of Mister Scott (Giuseppe Addobbati), that only ends when the one holding the gun, Jeff (played by the great George Hilton), who sought revenge for the death of the old woman and his father, slowly drops all the bullets on the floor.

A wise decision in Fernando di Leo's script is in countering the typical appropriation of the Yojimbo sort of hero (among other things) that became very common in Italian westerns, even he had already done it in Sergio Leone's film. Tom Corbett is the opposite of the outsider that appears to solve issues resulting from social corruption of a decaying town in the grip of criminals by annihilating them all by himself, like Django, whose protagonist is embodied by the same Franco Nero. Both films were released in 1966 and here the actor's figure could not be better exploited. At a certain point of the narrative it is clear that both his character and Addobbati's have become excessively passive within that power play. Mister Scott, in public, is the highest authority of his small empire, with the family's symbol taking almost every property of the town, including Tom's old ranch, and until then seen as the main responsible for the local disgrace, but in a great scene we see how he is completely dominated and complacent in relation to his son: after a discussion about the abuse of power for monstrous acts, ending up threatened by Junior, the father is called to help him perform his favorite piece of music, we see a detail shot of the father's clenching fists, prolonged by a travelling while he walks to reach the instrument, relaxing the fingers and joining the son, consequently helping to play the piece. The other sequence is already halfway through the film, with Jeff, who was always drunk, crawling thorugh the scene, begging the possible Django to leave the city, and ultimately promising to assist him to reach the villain's house, adding "with you, I'll be safe", after repeatedly rejecting any kind of help and demonstrating fear of confronting the numerous guards, but at the end of the sequence it is Jeff who ensures the passage through Scott's property by killing all the henchmen in a single move, without missing a shot, provided that Tom would assume responsibility for their deaths.

The hero becomes just a catalyst in the explosion of internal conflicts of the town, leading to its self-destruction, after all we discover it was Mister Scott himself who sent that message, hoping that Tom could take control of his property. In the end all these conflicts culminate in the long scene of the ranch invasion, which resembles more action cinema from the eighties than anything originated from western traditions at that time, with two men who bring down an entire army laughing, drinking whiskey and shooting while performing impossible stunts. After justifying the title with the result of the invasion, Jeff, in a close-up, points the pistol at one of the white doves flying after being startled by Junior's body and is hindered from shooting by his brother, who is framed only by a hand touching the gun, after a slight reframing both their faces are shown, they briefly exchange looks and turn forward, we have the countershot of the dove flying, freeze-frame, the end. A brilliant, obvious response to the submission scene mentioned before, a subversion of the order it represented.

Associating it with a future work of the director, this reminds me directly of the first scene right after the introduction of the villain played by Tomas Milián in Four of the Apocalypse, one of the late Fulci westerns, which starts with an image of this bird falling after being shot, as if the frame was not freezed and we could watch what happened next: we get the countershot of Chaco (Milián) and subsequently the death of every animal in its path. Chaco embodies the final stage of self-destruction of the society we see at the beginning of this film, living at the expense of the misery of those who still seek the future in that civilizational project. The possibility of a future ceases to be the indication of that society's reconstruction (as it was in Tempo di Massacro) to become its abandonment. The four main characters are the last survivors of a massacre that occurs at the opening of the film, only because they were criminals and the jail that kept them safe, now attempting to cross the desert with no resources in pursuit of a shelter, encountering along the way a religious group similar to the Mormons from John Ford's Wagon Master, in search of the "promised land", which will also be slaughtered by Chaco's gang. The hero's voluntary abandonment comes after his vengeance against the gang, with the destruction of all the remnants of that decadent society (including himself). What is left, then, far beyond the final confrontation between Chaco and the hero, is a community the outcasts meet in their path, constituted only of men, without any hope, which paralyzes upon hearing the miraculous weep of a baby brought by the travelers, in what must be the most beautiful scene in the director's entire filmography (where these are plentiful). It is one of the rare moments when a western presents an utopian yearning, not despite, but as a consequence of this universe steeped in cruelty in which Fulci inserts the audience, whether in films about the dead coming back to life or something like Zanna Bianca and its notorious fight scene between a dog and a bear, among multiple moments that seem completely displaced in an adventure directed at an infantile spectator, but perfectly appropriate in the context of his work, by continuing to give us a cinema that always sought to transcend its hideous surface. And despite winning recognition almost exclusively for his essential horror movies, Fulci's westerns are among the richest and most beautiful examples of the genre.