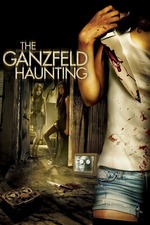 “I love the smell of cocaine in the morning.”

This is the kind of decadent shit I wish we would be seeing from the recent "neo-grindhouse" trend, that instead of adopting outdated conventions with a mocking tone, is more true to the spirit of those movies and so becomes a perfectly conscient product of vague appropriations of ugly, ridiculous and immoral images from contemporary low culture. It could be the intersection between late Lucio Fulci, Tony Scott and the poor, heavy-handed stylization typical of the DTV world, the result of a simplistic good idea done by people with enough knowledge of the genre’s tradition to create a mostly fascinating abomination.

Surprisingly, it is a damn lot better when the director forgets it was supposed to be a narrative film and seemingly just starts improvising. The scenes with the ghost are the worst, intrusive and laughable (they look like a concession to justify the “Haunting” in the title and make it more marketable), and the best moments come when it assumes a more free-form mode, playing with its fragmented use of the "found-footage" style in contrast to what is left unframed, the weird interactions it captures in a few places.

The suggested images, a fundamental part of the experiment performed, become estranged memories, a result of bleary associations with what is disclosed first on TV screens, without context, and the characters gradually become dependent on these images, mediating their present or past experiences. The protagonist ends up alone only with the experimental equipment and the cops find the camera still recording (as the rule goes for the subgenre), the crime scene is a complete mystery to them, what they see contradicts what we have seem previously and there is also talk about the “remains after someone dies” as small evidences of an unknowable truth… I guess this should be associated with the reason behind the strange montage, the real point of interest here.

It is intriguing enough, but far from satisfying, and I can imagine what this material would turn into if it was in the hands of someone like Rob Zombie or Pascal Laugier, a horror director from this generation that can be much more than just an appropriate aesthete, someone capable of elevating this script, balancing the horror with the other aspects (think of The Lords of Salem, this has similarities), instead we have a couple of very good scenes lost in a largely mediocre movie that manages to maintain its strange and demented atmosphere until that (possibly very gratuitous) ending, which again reminds me of Zombie’s movie, only more confused and inhumane. A big mistake, this should have at least one character in it more interesting than cardboard annoying teenagers.