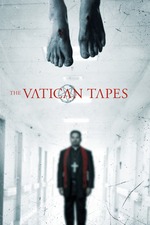 The ugly and often unpleasant counterpart to Blackhat. If Michael Mann might have attempted to glimpse God by submerging recognizable tropes of his cinema into a world on the verge of indifference towards human perception, action, existence, if his characters eventually escaped their usual trappings getting lost inside a system fully defined by fleeting and blurry information materialized in digital imagery, Mark Neveldine goes the opposite path, certain there is nothing redeemable to be taken from it.

All kinds of information thrown at us, barely composing a plot for The Vatican Tapes, like any projection on endless screens permeating our sight, are incapable of substantiating the events we (or the characters) witness, to compose a convincing through line, to ground it in reality. I am not saying the director is running away from the schematic nature of exorcism movies or found-footage horror with this, quite the contrary, the force of Neveldine/Brian Taylor's previous films depended completely on the adherence to a certain tradition that needed to be contested on its own terms, and I can't see a different direction here.

Its strength as a genre piece is in the very same incoherence, lack of narrative and tonal control it was dismissed for, in its inability to make sense of a tradition that is hinted at very scene and deprived of a satisfactory, unifying, cathartic resolution. Questioning is not achieved by avoiding clichés but by visualizing them without concession to the audience's easy digestion of the grotesque and depraved nature of a sort of spectatle that has come to define the genre. Each one of its shots is built to maximum individual impact, to collide with the whole and not to be supressed as part of a logical chain that allows superficial rationalization of things which could never be rationalized, not if we are supposed to look at its core themes with any seriousness. That is the moral issue.

We should be convinced, the whole time, by connections or distances artificially created by the “found footage” device. They are constantly dismantled. The possibility of evidence, of disclosure to the observed horror, of any spirit in its images is doubted. But they bring some truth, anyway. One might call Neveldine a cynic for his lack of commitment to an entire filmic tradition, to common sense, to stylistic niceties that go well with critics, for a brutal refusal to deviate from what surfaces directly imply, in all their ugliness, and, most of all, for his over-the-top/mock aesthetics. But I could not do it, I can't take it as cynicism. The Vatican Tapes is an opposing statement, in its own form, in the way it deals with expectations enforced on the film, enforced on us, as a manner of relating to what we watch, like we did with The Exorcist's blatant belief in the power of matter, in its own cinematographic theology. At first, Neveldine's purpose seems to be, quite simply, deformation, not revelation, taking individuals and institutions with it. This is the counterpart to Blackhat's miracle through digital imagery, nothing here is left untouched, its only revealing shot should be the possessed girl's twisted eyes, and after so much, the camera is still allowed to investigate the perversion of rituals, exactly like its aesthetic rituals. Discontinuous editing is also a question of morality.

Just the attempt to make us conscious of the bullshit, forcing to look through it, beyond it, is a sign of someone desperatly looking for truth, for real faith in a world that appears to define it with forms that desecrate by the same means and with the same ease that they sacralize.