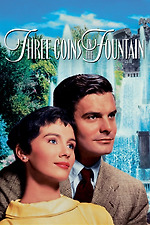 Three Coins in the Fountain

**Part of the Best Picture Project**

On the one hand, Three Coins in the Fountain, filmed in the then very new and exciting CinemaScope, is beautiful to look at. Vibrant colors and wide shots of Rome never really get tiring to look at. Even normal interior shots are gorgeously framed.

Which is a shame because the story the visuals are wrapped around in are so bland and vanilla I forgot simple character names and information while I was watching them. I tend to love old Hollywood films for their sense of heightened emotion, but the telegraphed nature here is inescapable and quite frankly made me understand even more why people don't like Old Hollywood movies.

Understandable why it was not nominated but still bland, Three Coins in the Fountain is essentially Baraka in Rome scored by a Frank Sinatra song and a vanilla RomCom shoved into it.