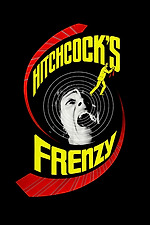 The penultimate feature film in the extensive yet illustrious career of Alfred Hitchcock is a highly underrated gem that paints a fascinating portrait of a serial killer and, as a movie, employs all the director's trademarks & styles which over the years have only played an influential role in shaping up the filmmaking manual for Hollywood's modern thrillers.

Set in London, the plot of Frenzy centers around a serial killer who has been terrorizing the city by raping women & strangling them with neck-ties. When the ex-husband of the serial killer's latest victim is suspected by the police for being the killer, he goes on the run to prove his innocence by finding & exposing the neck-tie murderer.

Superbly directed by Hitchcock, Frenzy marks his return to murder genre & introduces the antagonist to the audience in its opening moments only which makes the following acts even more nail-bitingly tense as the killer's subsequent planning of murders & its execution brings a fear of its own and keeps the whole drama quite suspenseful.

The entire movie is tightly structured, deftly written & employs a number of classic Hitchcock set pieces. Cinematography provides a grim atmosphere to the picture, camera movements are smoothly carried out & few sequences are beautifully photographed. Editing keeps the tension alive throughout its runtime while the score makes use of light or dark undertones at the right places.

On an overall scale, most works by Hitchcock after the creative height he touched with Psycho are often seen by many as his journey downward but Frenzy shows that even in the twilight of his career, Hitchcock remained as competitive & challenging as the best directors of the early 1970s. An intensely gripping entertainer from the first frame to the last, Alfred Hitchcock's Frenzy comes highly recommended.