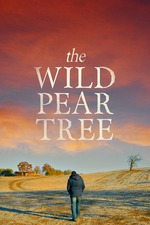 From the writer-director of Once Upon a Time in Anatolia & Winter Sleep, The Wild Pear Tree paints a fascinating portrait of the struggle & resentment of Turkish youth, resulting from lack of job opportunities & crushing weight of family debts, but unlike his aforementioned classics, its lengthy runtime is rather challenging & unearned.

Set in a small Turkish village, The Wild Pear Tree follows a young man who returns to his hometown after graduating and wants to be a writer. Already finished with his manuscript, he attempts to get his first book published by looking for local sponsors and scrapes together the money on his own when he can’t find any, but his father’s debts soon catch up with him.

Co-written & directed by Nuri Bilge Ceylan, the film is slow, patient & methodical in its approach as expected but the plot is a tad too drawn out and sitting through the extended dialogues isn’t always rewarding this time. Ceylan’s direction presents a certain level of comfort, plus his sketching of the mundanities of everyday life remain as captivating but it is also overly stretched.

The story ruminates on love, fate, morality, religion, unemployment & abandonment through the eyes of our protagonist who often comes across as arrogant, insolent & condescending but it is a proper reflection of young adults who reject the wisdom & advice of previous generations, consider themselves morally superior to others, and think they know how the world works until life knocks some sense into them.

However, it is the father-son relationship that the film basis its narrative on and this aspect is finely executed, keeping the interest alive until the end with their love-hate dynamic. The static camerawork allows room for more thoughts and follows our protagonist at all times. Its 188 minutes runtime is a tad excessive, and its severity is felt sooner or later. Editing is a mixed bag too, for the jump cuts are jarring while several extended segments end abruptly.

Coming to the performances, there isn’t much to complain about this aspect as all the actors are committed to their roles, play their part responsibly & are thoroughly convincing. Even the supporting characters with limited screen time exhibit sufficient depth, thanks to excellent writing & lifelike characterisation. Ceylan provides ample space for primary characters to breathe yet their arcs appear stifled for the most part before coming full circle in the end.

On an overall scale, The Wild Pear Tree provides an interesting glimpse into the life in modern Turkey, and makes for an absorbing character study of a young man who finds himself being dragged towards a destiny he cannot embrace. While there are moments that present the esteemed Turkish auteur in control of his craft, there are also times when he slips up and allows few segments to either go on for too long or cuts before they have run their course. Though not as gripping as his finest directorial efforts, Nuri Bilge Ceylan’s latest is still one of last year’s better films that’s more than capable of standing on its own, and is definitely a must for his fans. Thoroughly recommended.