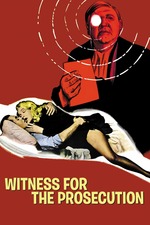 A top-tier example of storytelling perfection, Witness for the Prosecution is a seamlessly narrated, eloquently written, crisply photographed, wonderfully humoured & magnificently performed cinema that not only qualifies as one of the greatest courtroom dramas ever made but is a pure cinematic gold that can't & won't ever be dimmed by the test of time.

Set in London during the 1950s, Witness for the Prosecution concerns a master barrister named Sir Wilfred Robarts who takes on a murder case despite being advised against by his private nurse as he's recovering from ill health. The case deals with the trials of a man accused of murdering an old acquaintance and even though all the initial evidence finds that man guilty of committing the crime, Sir Wilfred accepts the case in order to defend him in the court of law.

Ingeniously directed by Billy Wilder, the film's premise may give an impression of a complex narration but under Wilder's supervision, every event unfolds with a remarkable simplicity and all the aspects work in perfect harmony with each other throughout its runtime. Smartly scripted too, it's quite astonishing that the film takes you through a wide range of emotions yet remains cleverly funny & wildly entertaining all the time.

Coming to the technical aspects, the camerawork is excellent in a way that every chosen angle, every fluid movement & every close-up only enriches the whole experience. Immaculately edited, the flow of narration is very smooth & not for once does it feel like the film is trying to do too much. And finally we have some breathtaking performances from its entire cast amongst whom Charles Laughton turns out to be this show's limelight & his work here is absolutely spellbinding.

On an overall scale, Witness for the Prosecution is a masterwork of filmmaking art & a masterpiece of quality entertainment that's taut, witty, clever, refined & poetic in every sense. The effortless manner in which it invites the audience into its premise, takes hold of their attention from its opening moments and never lets go until the very end is sheer cinematic magic. I haven't seen that many Billy Wilder's films but I'm pretty sure that Witness for the Prosecution will be incredibly hard to beat. Highly recommended.