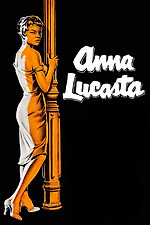 As written, “Anna Lucasta” (inspired by” Anna Christie”) centers on a Polish-American family and an estranged daughter-turned-prostitute returning home. But it was originally performed and adapted by the American Negro Theater, opening in Harlem with an all-black cast in the 1940’s. Fifteen years and one Paulette Goddard film later, an adaptation of the African-American production was released.

Nobody talks or writes about Anna Lucasta. Nobody seems to have seen it (it’s available on Instant Netflix fyi). Those who do write about it do so for its historical value and seem underwhelmed by what’s actually there. It was barely advertised and also dismissed upon release.

I love Anna Lucasta. For one, it’s a needle in a haystack to see an all-black cast during the studio era (fuck, any era) in something other than a musical. Most importantly, it’s damn good. Cinematic? No; Arnold Laven’s direction is something tepid. It’s seen as a detractor, possibly a deal-breaker, when a film isn’t able to shed its stage origins. But there’s a particular way theater grabs hold of its audience from the get-go, using personalities and everyday dynamics that are old hat for the characters but brand new to us. Anna Lucasta fails in the directorial department, but it’s got this quality in spades.

It also has Eartha Kitt, Queen of the World; watching the camera take to her serpentine presence is a privilege. And then there’s Sammy Davis Jr, character actor Rex Ingram as Anna’s deeply troubled father, and a host of offbeat characters rounding out the central family. Though the film prefers a romantic interest it’s impossible to get behind (who among us actually wants Anna with snoozefest what’s-his-name over the one, the only, Sammy?), Anna Lucasta has an immediately welcoming energy in which we the audience are invited into the well-worn dynamics of this family as Anna herself is begrudgingly and deviously welcomed back into the fold.