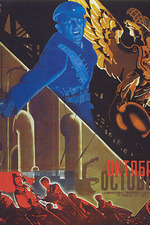 The word ‘revolutionary’ could be used as a double entendre to describe this work by Sergei Eisenstein. Used one way it could be referring…never mind, you get it. October: 10 Days That Shook the World is an account of the Bolshevik revolution in Russia during 1917 leading to the downfall of the interim government and all the bourgeoisie swine who had it coming thank you very much. Its delivery and pacing more closely resemble one of those old ‘News on the March’ reels they used to run in the 30s and 40s before feature films in the cinema than it does any traditional war drama made to that point. This resemblance is due to how the film is edited together and what it would become famous for in the evolution of film, what is known today as Russian Montage.

I should also say that I have made up my mind that during these FSDO revisits that I will do absolutely no research or fact checking while evaluating the films. Basically what should become apparent is that I will talking out of my ass and nothing I say should be considered accurate or meaningful but hopefully, it will be original. Shootin from the hip here. As far as October, I don’t really need to get into the story or characters because that is not what is important here. It’s your basic shit boils over scenario which is always somewhat satisfying to watch if you are into that sort of thing. No individual characters are developed and what we have here is more of experiment in this new form of storytelling to relay as much information as possible to the viewer in the most expedient way possible via the montage effect.

What a nightmare it must have been to edit this thing, my God. I don’t know if Eisenstein did it himself or what but that raised some questions. Can you imagine?

“Hey everybody I just got that editing job I’ve been looking for!”
“Oh, really whose film will you be working on?”
“Eisenstein’s!”
“Oooooooo, tough break, sorry to hear that. See you in a few years if you haven’t killed yourself.”

I can’t even begin to imagine the work put into this. The cuts come at a machinegun rate of fire and are nonstop throughout. If anyone lost any slates they would have been fucked I would think. Anyway, when I see this technique in action I think of speed reading. Supposedly (I can’t cite this) When you learn to speed read you only need to take in a fraction of the total information in order to comprehend what is the aggregate meaning of the sentence. Your brain can quickly pick up on patterns and fill in the blanks, giving you the same end result as if you had slowly studied every word. It seems this is true as well with moving images. Whether it is a mob storming a stronghold or someone loading a rifle, Eisenstein shows you a piece here and a piece there, sometimes inundating you with visual information. The juxtaposition of one image with another and the correlation between the two is also a factor, the causal relationship is bidirectional. At the end of the sequence you would be hard pressed to remember every individual shot that you were given but you should have a clear understanding of the series of events and what has transpired. Imagine one continuous 10 second shot of a man loading a gun. Eisenstein would rather show you a bullet in hand then cut to a magazine and then again cut to a round sliding into the chamber. He conveys the exact same concept but in a fraction of the time and it is more interesting to watch as well because it is more cinematic and the perspective can change with each cut.

As far as the film goes, it’s a bit boring but like I said that’s not really what I was looking to get out of this anyway. If I compared seeing this film to looking at a clock, I wasn’t interested in knowing what time it was, I was trying to see how the cogs and shit were moving to make it run. To test the effect of this transferal of information I even sped the film up to run at double speed and I have to say, the technique is impressive and it works. Few directors still use this type of editing and if they do, they use it sparingly. The ones that do use it tend to end up with reputations as obnoxious or pretentious show-offs. Guy Ritchie comes to mind.

Anyway, this FSDO entry is late because I had no idea what in the hell to write about this so I apologize but here is something from far more clever and entertaining individuals than myself to make up for it…… We're Gonna Need a Montage