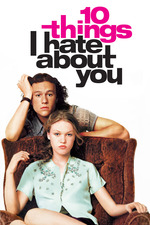 Despite its predictability, 10 Things I Hate About You is an enjoyable flick. The cast is strong, the writing is solid, and Joseph Gordon-Levitt looks really young.

I was lucky enough to see it at a socially distanced outdoor cinema, thanks to Cookie God, with him, lachysaid and another friend. We arrived there pretty early and waited for two hours for the movie to start, but it was still an exciting experience. At one point I turned around, and there were more people than a cinema could ever fit. It surprised me, but once I remembered the cinemas' situation, yeah... it wasn't.

Once the movie started, it was surprisingly quiet. Crickets were chirping, before Bad Reputation drowned out their buzz as we sat on soft blue beanbags, underneath the stars.

To talk about the film, I'll highlight the performances. Not for one second did Heath Ledger's performance make me think of the Joker. All I saw was an intimidating goofball doing his best to be romantic. Julia Stiles isn't "like other girls." and she's convinced me we should screw society.

I liked Joseph Gordon-Levitt, so it disappointed me we didn't get more of him. We start with him as our main protagonist, but it turns out Ledger and Stiles' romance is the central storyline to follow, so we kind of forget about him. I'm disappointed we didn't get more Gordon-Levitt, but Ledger and Stiles' romance was engaging enough.

Is it just me, or does Larisa Oleynik give me Katie Holmes vibes? And David Krumholtz's character was hilarious; playing the nerd who doesn't fit in anywhere (not even with his fellow nerds).

It's a fun time. There isn't anything wrong with it, but nothing lifts it above average. I forgot to mention it's an adaption of a Shakespeare play, and it's my favourite movie adaption, thus far. A solid flick that's easy to put on while doing something else. Sorry about the rating lachy!