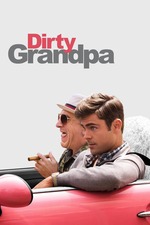 Thank God January is almost over! For better or worse, I'm actually kinda glad I saw Norm of the North, because it's served as an excellent vaccine for one of the worst months of the year for movies! It also helps that today's film stars two unexpected actors working together in a comedy, Zac Efron and the legendary Robert DeNiro! I've been looking forward to Dirty Grandpa ever since it was first announced couple years ago, but I'd be lying if I said its release date didn't raise a few red flags.

Here's the story. Right before his wedding, an uptight guy is tricked into driving his grandfather, a perverted former Army general, to Florida for spring break.

Good news! You can take those red flags down, because this movie was awesome! Before you freak out, I mean awesome in the same way that Grandma's Boy is awesome: both are terrible movies, but I can enjoy both equally as guilty pleasures! This is another one of those movies that I don't think I have enough material for a full review, but I do have words to say about those who continue to underestimate Zac Efron!

But first, a quick summary of my thoughts.

Dirty Grandpa is exactly the type of movie that wouldn't work without the combined talents of Robert DeNiro and Zac Efron, who have a surprising amount of chemistry! Sure, about 75-80% of this movie is nothing but the worst kind of humor: gross out gags, racist, sexist and homophobic stereotypes out the wazoo, waaaaaaaaay too many drug references, etc. But Hidden beneath all that trash is a good 25% of genuinely hilarious character moments, and some heartwarming scenes that actually make you sympathize with the characters. This is the perfect film to just sit back and enjoy with your friends, no need to be so critical.

With that said, let's get into the more interesting discussion, which revolves around Zac Efron and why you should quit underestimating the talent within him!

First off, and this doesn't just apply to him, but to anyone with a similar history, it's time to let go of the past! Stop letting the fact that he got his first big break from High School Musical get in the way of taking Efron seriously as an actor. While I recognize that I'm not the target audience for those movies, viewed objectively, I can't deny that there was a lot of great talent involved! If anything, these movies quite definitively prove that Efron is a triple threat: he can act, he can sing, and he looks like a bonafide movie star!

But if you really can't get past that, there are two films that I highly recommend checking out before you say anything about this guy not being a good actor: Me and Orson Welles and Neighbors! These two movies are on opposite sides of the spectrum, where one is a drama directed by critically acclaimed director Richard Linklater, while the other is a Seth Rogan and Evan Goldberg produced frat boy comedy! This shows that Efron's got a lot of range, and that he's game for just about everything.

Unfortunately, outside of those two films, nothing else that he's done has been really successful either critically or financially. The lowest his career has gone was last year's We Are Your Friends, a.k.a., "We Have No Friends," according to the box office. It's bad enough that this movie scored a measly 41% on Rotten Tomatoes, but it's also in the top 10 worst wide release openings of ALL TIME!

So what should Zac Efron do? Fire his agent! Sure, Dirty Grandpa might make a few bucks, and Neighbors 2 is a guaranteed hit as long as it's as good as the original. But after this, he really needs to find better work, perhaps take a page from the books of Matthew McConaughey and Leonardo DiCaprio and start tackling more challenging roles!

Until then, go out and see Dirty Grandpa this weekend! Invite a few friends, grab some drinks and enjoy yourself! I'm tired of seeing Zac Efron continue to be underestimated, but if this movie is a hit then maybe there's hope for him in the future...