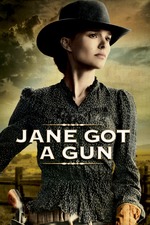 Jane Got a Gun

After at least a year of waiting, I finally get to see Jane Got a Gun! There's a fascinating story behind the production of this film, with a rousing game of musical chairs between actors and directors! Lynne Ramsay was originally set to direct, until she left the project in March of 2013. The roles of John Bishop and Dan Frost have been juggled around by several different actors, including Jude Law, Michael Fassbender, and even Bradley Cooper, until they finally settled on Ewan McGregor and Joel Edgerton. Gavin O'Connor took over the director's chair, with a screenplay co-written by Brian Duffield, Anthony Tambakis and Joel Edgerton.

Here's the story. After her outlaw husband returns home shot with eight bullets and barely alive, Jane reluctantly reaches out to an ex-lover who she hasn't seen in over ten years to help her defend her farm when the time comes that her husband's gang eventually tracks him down to finish the job.

As a sucker for a good western, I quite enjoyed this one! It's not perfect, but the good most certainly outweighs the bad. Here are my positives and negatives.

The best part of this movie was the acting! While part of me is admittedly disappointed with the departure of Michael Fassbender, I really found myself liking the final cast! Natalie Portman impressed the hell out of me as the titular character Jane, playing another awesome Brisbyan hero, a mother of two girls put in a difficult situation that requires her to reconnect with a former lover. Speaking of which, Joel Edgerton is an actor who gets better every time I see him on screen! I love how Dan Frost is a character who's not entirely a hero or a villain, at one point seeking to gun down Jane's husband Bill Hammond, played by Noah Emmerich. My favorite performance though has to be Ewan McGregor as the main antagonist Colin McCann, the leader of the Bishop Boys! In the hands of a lessor actor, this role could have been either too undercooked or over the top, but McGregor played it just right!

The story I thought was really solid! It's not the most original or groundbreaking movie within its genre, but it's still well told. I like how this movie was much more character driven as opposed to plot driven. It's not as grand or exciting as some of the classics from the golden age of westerns, but it hits the necessary beats and delivers every time!

One beat in particular that was extremely satisfying was the climax! The amount of explosions that went off in this battle at the farm were just enough to make Michael Bay proud! Even after that display of fireworks, there was still enough great tension during the final standoff between Frost, McCann and Jane, that had me at the edge of my seat!

Finally, the other major highlight has to be the production design and costumes! Filmed on a modest budget of $25 Million, they really did a great job nailing the time period in which this movie takes place, shortly after the Civil War. Everyone in the cast looks like belong in that era, especially McGregor, who was almost unrecognizable!

Coming up with negatives for this movie wasn't exactly easy. Just because a movie isn't a 5/5 or 100%, doesn't mean there has to be definite "problems" that I can point out. However, I can say that, especially with a runtime of just over 90 minutes, this film could have used some more meat, especially during the second act. Maybe it's just because I've been waiting so long to see this film, my expectations went through the roof, so I'm left a little underwhelmed. That being said, the climax was a good payoff!

Jane Got a Gun is a good movie. I'm glad I finally got the chance to see it, even if it didn't live up quite to my inflated expectations. It's got great acting across the board, incredibly well done production design and the story delivers on all the necessary beats! This may be your only chance to see this movie on the big screen, so take full advantage of your opportunity while you still can!