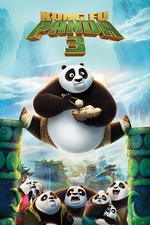 A lot of people seem to underestimate the talent and creativity of Dreamworks Animation. They see dreck like *shudders* Shark Tales, Over the Hedge, Shrek the Third and Home and think "wow, what a bunch of talentless hacks! They pale in comparison to the likes of Disney and Pixar!" We'll get to why that's hilarious later on, but for now, I want to celebrate one of Dreamworks Animation's greatest achievements (that doesn't come from the story of Exodus), the Kung Fu Panda franchise! Kung Fu Panda 3 opens this weekend, and it's the first co-production between the American studio and it's Chinese counterpart Oriental Dreamworks, a new joint venture formed in 2012.

Here's the story. Continuing his "legendary adventures of awesomeness", Po must face two hugely epic, but different threats: one supernatural and the other a little closer to his home.

Instead of doing a full review for the movie, I have something else I'd rather talk about, concerning both the history of Dreamworks Animation, and the future of the Kung Fu Panda franchise. So for now, here are my brief thoughts on KFP3.

Yeah yeah, I can see you rolling your eyes right now, thinking "here we go again, Mike dishes out another 5/5 like an order of fries at McDonalds," but hear me out! Yes, Kung Fu Panda 2 is still the best film in the trilogy, with a terrific villain, a darker yet funnier tone and some of the best fight choreography, animated or otherwise, in film history! But if you asked me which one was my favorite, it'd be part 3! For Oriental Dreamworks's debut feature, the animation is absolutely stunning! I didn't see this in 3D, but there were plenty of scenes where I wish I did, especially towards the beginning during the opening credits! All of your favorite characters are back, from Po, to master Shifu, to the Furious Five, and even Master Oogway! J.K. Simmon crushes it as Kai, the main antagonist, who may not be quite as terrifying as Lord Shen, but he's twice as hilarious! While the final battle may be as good as the first two films, story wise, Kung Fu Panda 3 makes up for that with plenty of heart and laughs throughout! This one is definitely a must see for all ages!

Now that we got that out of the way, time for a little history lesson about where Dreamworks came from.

Dreamworks gets their initials "SKG" from its founding fathers: Steven Spielberg, Jeffrey Katzenberg and David Geffen. Katzenberg's story began in the mid 80's, back when he still working for the Walt Disney Company. He was one of the driving forces behind the Disney Renaissance, which gave us such classics as The Little Mermaid, Beauty and the Beast, Aladdin and The Lion King! In 1994, after the tragic passing of Michael Eisner's 2nd in command Frank Wells, Katzenberg was in line to claim that position. However, Eisner refused to promote him, resulting in a massive falling out between the two. Thus, born from the ashes of Katzenberg's hatred for Disney was Dreamworks Animation!

Nowhere is this more obvious than 2001's Shrek, a Who Framed Roger Rabbit-style parody of all the classic Disney fairy tales, especially the ones made famous by Disney. Even before and after that movie, there was obviously hostility between the two studios. I've heard many stories about behind the scenes drama with the productions of Dreamworks's Antz and Disney/Pixar's A Bug Life, mostly centering around which movie came first and which is merely copying the other. Shark Tale, which I mentioned above, is easily the worst film to come from Dreamworks Animation, and that was released a year after Finding Nemo, arguably one of Pixar's best at that time!

However, after the failure of 2006's Over The Hedge, I began to notice a creative shift in the company. No longer was there any fuel and the Disney hate fire. Instead, they began taking more risks, exploring various genres, such as (strangely enough) romantic comedies with Bee Movie, sci fi with Monsters vs. Aliens and Megamind, fantasy with How to Train Your Dragon and Rise of the Guardians, and of course, martial arts with Kung Fu Panda! This is the film franchise that I feel best represents maturity from Dreamworks Animation, seamlessly blending comedy with drama and some Asian philosophy.

Now, I'm about to say something that some film fans might consider blasphemous: the Kung Fu Panda trilogy belongs in the same conversation as some of the greatest of all time, including Toy Story, The Lord of the Rings, Indiana Jones, and yes, even the original Star Wars trilogy! In fact, my opinion of the KFP films matches almost entirely to my thoughts on episodes IV, V and VI. Both trilogies start with a fun action adventure movie that establishes their respective universes and sends our main heroes on their journey to greatness. The second film of each franchise is the darker, more action packed follow up that continues the story from the original as opposed to rehash what's already been done. As for part 3, those who love these films feel like the good outweighs the bad, forgiving some of the missteps along the way, while those who don't love them are quick to point out everything they've done wrong.

So, where does the future lie with Kung Fu Panda. Part 3 ends with Po fully embracing who he is as the Dragon Warrior, mastering chi and becoming a martial arts master, teaching his friends, family, and all the people of the secret panda village the art of Kung Fu, bringing the events of the first movie full circle. According to Katzenberg, he claims that the series could become a 6-parter, with three more sequels to come. However, KFP 3 directors Jennifer Yuh Nelson and Alessandro Carloni aren't as certain, with Carloni telling Collider "With the sequels, we don’t want to try to have them feel open-ended. We want it to feel like a completed journey, and we feel this movie does. And then, if a fantastic story presents itself, great." Would I like to see more sequels? Hell yeah I would! Since we're probably never going to get a sequel to School of Rock, perhaps they could take that premise and find a way to work it into the Kung Fu Panda franchise? Who knows, the possibilities are endless!

For now, regardless of whether or not this series continues, everyone should go out and see Kung Fu Panda 3! I can't believe I'm about to say this, but this is my favorite movie of the year so far, and it's a freaking January movie! This month was a weird one for sure, where I've given not one but TWO 5/5's for January movies! I hope this month continues to improve each year, but stay tuned for this year, as there's plenty more awesome to come your way!