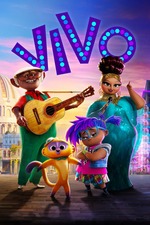 Vivo is an animated musical comedy adventure film from Sony Pictures Animation. This film was directed by Kirk DeMicco and co-directed by Brandon Jeffords, from a screenplay written by Peter Barsocchini and Quiara Alegría Hudes, and stars Lin-Manuel Miranda as the titular Vivo, a music-loving kinkajou who embarks on the journey of a lifetime to fulfill his destiny and deliver a love song for an old friend. Full disclosure, I watched this movie the day after my great-uncle passed away, so for me this may hit differently than for others. Nevertheless, I thoroughly enjoyed this from start to finish, it was basically everything I wanted it to be, and then some. Vivo has been a passion project for LMM as far back as 2010, hot off the success of In The Heights on Broadway. At the time, the film was set up at Dreamworks Animation, but was dropped due to restructuring. By 2016, it was acquired by Sony Pictures Animation, and the rest is history. The reason I bring all this up is because, as I was watching this, I could feel that burning passion throughout every frame, every note, and every lyric. Speaking of In The Heights, this film reunites Lin with his co-writer Quiara Alegria Hudes and composer Alex Lacamoire, and they honestly make a great team. We saw already with Moana how well animation fits Miranda's musical stylings like a glove, and Vivo is simply the logical conclusion. I know it might be cliché to compare his career to the late Howard Ashman, but it mean it sincerely when I say that Miranda really is picking up where he left off. As a performer, I can say with confidence that his singing has certainly improved since Hamilton, and in this movie it works because he sells the emotion in each song. The rest of this cast is incredible. Grabbing Juan de Marcos González and Gloria Estefan to voice Andrés and Marta respectively was a stroke of genius, and each of their musical numbers brought me to tears. But the true standout performance was Ynairaly Simo as Gabi Hernandéz, Andrés' grand-niece. She radiates a wild, chaotic energy that's a great foil to Vivo's de facto straight man. Between this movie and The Mitchells vs the Machines, Sony Pictures Animation has basically established permanent residency at the top of my list for 2021! If you're a fan of Lin-Manuel Miranda, or you're simply in the mood for a fun animated musical romp, then I highly suggest checking out Vivo, now streaming on Netflix!