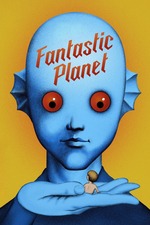 Fantastic Planet is an amazing illustrative animation that transports us Oms to a world where Draags reign supreme. Set in a sci-fi atmosphere that exudes the 70’s funk scene in both art and score, themes are presented that translate to our real world.

It’s only when we work together and share our resources of knowledge, skills, and acceptance do we finally live in peace.

If a live action remake was made, Denis Villeneuve would be perfect for the job.