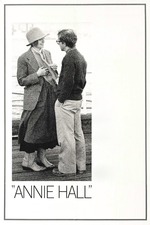 I can’t really tell if Woody Allen’s Annie Hall took me by surprise or not. On one hand, I was hooked almost immediately after one of the first scenes, where Allen’s character Alvy and his girlfriend Annie Hall (Diane Keaton) are waiting in line to see a movie and the man behind them won’t stop voicing his narrow opinions on director Federico Fellini. Right away the film comforts those in the audience who enjoy movies by sharing an inside joke - but does that position us where we want to be? At first, yes, because we would all like to believe that we’re smarter than the obnoxious one behind us, but as the film goes on, it shows us that Alvy leads an unduly alienated life. This is a major theme in the subtext of the film: is counterculture - that of being further “woke” than others - worthwhile when it alienates us from everyone else?

Annie Hall’s plot is, albeit jumping between periods in time, quite straightforward. It tells the story of Alvy, a successful stand-up comic, how he fell in love with Annie hall, and the ups and downs of their relationship. While there is far more at play than the relationship, this is where the film loses its strength, because everything interesting is happening beneath the surface. We’re told that we have to care about Alvy’s relationship with Annie because the title of the film is Annie Hall, but I don’t feel there’s anything between the two that resonates. Alvy is drawn to Annie because her suburban upbringing makes her unique in the city of New York (we see later when we meet her family how suburban she truly is), and Annie is drawn to Alvy because…he’s funny?

Alvy is a cynical character who we spend almost the entire film exploring - not his relationship with Annie. Everything we learn from Annie is by proxy when we’re actually learning about Alvy. Of course this is to be expected as the film is more or less a monologue by Alvy told through the use of flashbacks, but the film spends so much time depicting its surface level story when the subtext is far more interesting.

The way this story is told, Alvy’s sexual inadequacy is paramount in all his relationships - we’re shown this as every encounter he has with another women is subjected to sex. The story in the subtext shows this is a product of the alienating lifestyle Alvy leads - he doesn’t seem to have really ‘grown up’, and while I don’t subscribe to the idea that everybody needs to ‘grow up’ (what does that even mean?), I do believe everybody should grow. We learn throughout the film that everything about Alvy has a boyish, adolescent quality; his language, his cartoonish hair and glasses, his life sustained by telling jokes. This is why he feels alienated in a city full of business, why he’s stuck in a constant lull, but it’s apparent from the beginning of the film that Alvy chooses this condition for himself.

We learn near the end of the film that Alvy isn’t about to change. He travels with Annie from the cold, grey city of New York to sunny Los Angeles where the film suggests happiness awaits. Alvy’s friend Rob has moved to Los Angeles and he is far happier, Annie finds success in Los Angeles, bringing her happiness, but Alvy chooses to view the West Coast through his lens of New York cynicism and that’s why he hates it. That’s why he’s destined to return to New York and his life of psychoanalysis where he will go on to write a play about Annie Hall - this time with a fairytale ending.

I like that the conclusion doesn’t end on a note of gloom. Alvy living in New York City is really what this film is about, he just fills us in on his love life along the way.