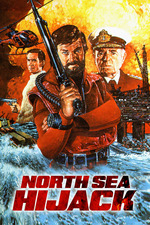 James Bond stars as Roger Moore: bearded, misogynist counter-terrorist expert, with Anthony Perkins, James Mason and Michael Parks in... the greatest movie poster with the worst alternate title ("ffolkes" - yes, that was the unbelievably awful American title) of all time.

Though Roger Moore is no Richard Harris, and North Sea Hijack is no Juggernaut. But that's not to say there isn't charm to this film. Anthony Perkins always makes for a delicious madman but it is Michael Parks in his criminally limited screen time, who steals the show with his gigantic magnified lens glasses that make his eyes ten times bigger than normal. He sizzles with little. But alas, the poster promises much more camp action than is included in the picture. All the camp can be boiled down to Moore's performance because, well, camp is all he is really capable of. And lose the beard. Roger Moore does no justice to beards whatsoever.

Colin the dude liked these reviews

Colin the dude is using Letterboxd to share film reviews and lists with friends. Join here.