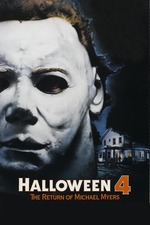 the white myers mask in THAT scene oml 😭

i really liked this more upon rewatch, i used to seriously dislike this one. but i really enjoy it now, however most things that i hated prior i still hate so that wasnt a suprise. the characters are mid in this, rachel and jamie are pretty good. i know jamie is a legacy character and all but she really isnt amazing in this or anything shes just kinda there, dont get me wrong danielle’s performance is really good for her age but she doesnt have much of a character. her backstory feels incredibly lazy and her supposed trauma (from things she never even witnessed or seen in person??????) feels sorta forced. rachel is pretty good, she’s written decently and i could get behind her character and i enjoyed when she was on screen. everyone else sucks. plain and simple, theres nothing else to it. they suck.

i didnt mention loomis because he deserved a section of his own. even michaels big ass shoulders couldnt hold this film up, loomis was the one to do it. donald gives an absolutely incredible performance as loomis with what he was given. just like in h2 you can feel how desperate he is whenever he’s on screen. he also gives the best line in this which i’ll quote down below 👇 loomis just gives these films something else man, he’s not in this an awful lot but when he is i actually really enjoyed watching this. the backstory behind him and michael surviving the hospital will never not be dumb. its just so gd lazy and such a stupid reason to bring the two back, but hey at least we got them back for some more slasher action even if it was lazy.

michael is good in this too. he’s much more of a brute than he is the previous two, they obviously had taken notes from the friday franchise while planning this film because michael is seen throwing people off a truck (best kills in this btw it was so fuckin cool to see) and literally stabbing people with the barrels of shotguns and also grabbing peoples faces and necks and just crushing them with no struggle at all. he can also be pretty creepy in this two, notably in the visions/dreams jamie has. notice how i didnt say anything about the mask or design because i quite simply ✨hate it✨ he looks so stupid. the mask is not scary at all, he’s actually pretty funny to look at in this. the shoulder pads weren’t it either, and he’s super chubby in some scenes. not to mention his appearance is super inconsistent throughout this. he just looks so fucking stupid and not scary 💀

this can also get pretty boring at times, i found my self daydreaming and looking away a few times because i didnt feel invested anymore. luckily that was only 2 or 3 times. other than that i was into it for the most part

Everyday I look at myself in the mirror, and everyday I remember.
Look at me Hoffman.
Take a good look!

I don’t want anyone to have to live through that night again.