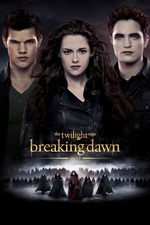 Okay, so do I think any of these films are good? Well, no. Not in the least. But do I recommend you watch them? Abso-fucking-lutely you should. I had a blast watching all this crap.

And this one is no different. Again, there's some half-decent direction here, unlike New Moon or Eclipse, but the writing is still hilariously bad, any hint of "romance" between the two leads falls completely flat, the dialogue is terrible, and the performances are some of the most wooden I've ever seen.

I mean...except for one stand-out. One godly performance that as far as I'm concerned, makes this entire film. And that is Michael Sheen as Aro. Good god, he is surely the only person on set who knew the kind of bullshit he was working with and he was going to have fun with it, goddamnit.

But really, I've already covered all the bases for this film series, and if you found the previous ones hilarious, then you'll find this one hilarious. The only other thing to note (even if I refuse to spoil it) is that the ending of this film...I mean, I was stunned. It's maybe one step above "and it was all a dream, the end". I'm not joking.

So you can look forward to that if you've yet to experience these disasterpieces, and if you thrive on cringe humour like I do, please do yourself a favour and experience them already.