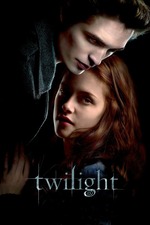 I consider myself something of a connoisseur of cringe, an aficionado of awkward, and I would put another example here but I can't think of anything else that alliterates. So I figured it was the right time. And yes, I am fully prepared to watch the whole series, mostly because this was absolute comedy gold, but also because my girlfriend was a big twihard as an edgy 13 year old, but now wanted to watch them again to see if they were funny.

And Christ almighty was it an...experience. We laughed until our voices were no more audible than Kristen Stewart's. The acting is so stilted, every line of dialogue is so forced, and the writing...well I don't know how much of the book is in this film, but let's say that I fully believe Robert Pattinson when he once publicly called Stephenie Meyer a "madwoman".

Because, like...just who am I supposed to care about? Edward is a creepy stalker with a haunting rape face, and I'm pretty sure Bella has no motivation beyond getting a vampire who openly admits he can only barely resist tearing her apart when standing next to her to fuck her, and when you put them both together...shit, they've got about as much chemistry as two pale, PALE towels folded on top of each other.

The pacing is dogshit, you could have accomplished in 20 minutes what this takes about an hour to do, the story takes two hours to end up basically back where it started, the directing feels non existent, and the whole film is an absolute eyesore, everything's so goddamn BLUE.

And holy hell is it a good time. Edward's "I'm gonna puke and cum at the same time" face? Hilarious. Him coming off as if he's saying Bella doesn't have a thought in her head? Sidesplitting. All the bad vampires coming out of the fog looking like the cover of a shitty black metal album? A sodding riot. Seriously, if you are looking for something to cringe and laugh at, you could do a lot worse. And if you're looking for something actually good in this...well, credit where credit is due, there are a handful of nice shots, and some good songs on the soundtrack, even if they often use them in the stupidest ways imaginable.

So if you're as fond of cringe as me, you won't regret watching this, and I wholeheartedly recommend you do.