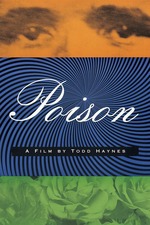 A poetic and highly symbolic feature debut from a challenging, but important contributor to American cinema. Poison doesn't really compare to any of Todd Haynes' future films; with most of Haynes' directorial efforts, I was almost immediately aware of the thematic links between the different elements of his filmography, but Poison feels almost fundamentally different, even though it is thematically right in line with many of the director's future works.

The thing about Poison is that it's an anthology of three different segments which are so drastically different in tone and style that it becomes increasingly difficult to discover the linking thread weaving them all together. The first segment is a mockumentary-styled investigation of the case of a seven-year-old boy who murdered his father; the second one presents a black-and-white homage to the sci-fi horror genre of the 1960s including the mad scientist trope, and the final segment presents a story of affection and attraction between two men in a prison, highly reminiscent of Un chant d'amour (1950).

Each of these three different segments would have worked superbly as a half-hour short film, and to be honest, I highly enjoyed every single one of them on their own. Todd Haynes' stylistic choices work perfectly, and the symbolic imagery displays an insightful and challenging film that I'm sure offers a lot more to unravel than I actually discovered. In the end, not everything comes together seamlessly, even though the thematic links are undoubtedly present. The low-budget aesthetic actually contributes positively to the final result. It's not for everyone, but a really interesting introduction to Todd Haynes' filmography that surprised me by delivering a lot more than I thought it would.