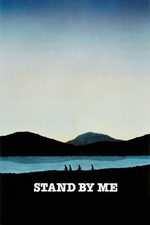 Whenever someone asks me for my favorite movie of all time, I am hard-pressed to come up with a definite answer and usually avoid restricting myself to just one ultimate choice. Then again, there is this one movie that usually comes to my mind first when thinking of a reply to such a question, and that's Rob Reiner's Stand by Me.

This film is such an emotionally devastating tale about the loss of innocence and a farewell to the days of your childhood. A film that most would immediately link to the feeling of nostalgia, even when the film itself is not really nostalgic – it is only about nostalgia, about the way it shapes our memories and drives our experiences.

Stand by Me is the tale of a writer looking back at days long gone by, days shared with the best friends he ever had, days of adventure and joy and recklessness. These are memories of better times – but that's not because the times were actually better; it's because there were no responsibilities pressing down your shoulders, it's because you could be careless and unmindful and would most likely be fine; you could forget to bring food to your camping trip and would be able to shrug your shoulders and go on without worrying too much.

Stand by Me is a mirror into the way children look at the world surrounding them, a harsh reminder of how our environment shapes the way we grow up and develop our character. It is an appeal that dismissing a child because of their parents, their wicked siblings or their poor upbringings will not lead the child to turn out any better; but believing in them, giving them the chance to improve their life for the better will.

Stand by Me is sentimental, but not for the sake of sentimentality. While it (successfully) aims to evoke those very feelings, it is ultimately a statement about how we rarely realize we are saying goodbye to something until we notice it's gone forever. Similarly, our protagonist Gordie is our reminder that the film does not merely show children growing up in their blissful ignorance, but rather children holding on to their inexperience, their innocence: they are aware that childhood is but a waning period of their lives that will never return once it is gone, but they are also aware of what growing up has done to their parents, siblings, the people around them, and they are very much aware that their fates have most likely been written on the day of their birth. And not all of them will manage to bite through the obstacles laying in their paths.

Stand by Me is such a special film to me, a film about childhood that has so many things to say at once about life and our perception of our past experiences. The character interactions are indescribale: endlessly funny, sad, and joyful to watch. Has there ever been a better cast ensemble of child actors than Wil Wheaton, Corey Feldman, Jerry O'Connell and River Phoenix in their raw, immediately believable interpretation of young friendship? It's a film that leaves me sad and emotional anytime I watch it, yet I still hope to return to it many times again in future. But even if not, this is a film that will always occupy a special place in my heart.