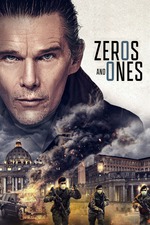 Your brother was a Communist.

My brother was a revolutionary.

This scene is absolutely haunting to me. Seeing Ferrara’s wife laughing like that as they’re showing him the footage from when they forced JJ to have sex with her, is chilling.

I’m dying to see anything that Abel makes, so of course I fucking loved this. Seeing it at Cinema Village was a great experience and I was piecing it together as we were walking out of the theater. When I got home, I was already in the mood to turn it on again. So I downloaded it.

This is definitely a film about paranoia and the alienation one faces in a world dominated by capital. It is an extension of New Rose Hotel, because we also see a protagonist trying to make sense of the small bits of information given to him through digital images and grainy surveillance video. Then the fear and anxiety associated with a pandemic. The only people in the streets are men in Hazmat suits sanitizing everything. This makes the opening even more eerie, as we see JJ walking alone in the evening through the desolate streets of Rome. We see people cleaning money with hand sanitizer, kissing each other with masks on, etc. And of course the fear and paranoia looming over JJ throughout the whole film, as he tries to find his brother and stop this disaster. The fact that we are never explicitly told what the threat is makes this theme of paranoia even more obvious. It’s all about the idea of what could be happening.

The film is also about the end of the world, and a grave danger that is only hinted at during its runtime. This occurrence finally happens at the end when JJ and this woman (his brother’s wife? Wondering about that because the son she was taking care of was his brother’s son) go up to the roof of the building and watch it all happen.

Zeros and Ones is extremely dark and there is always a danger looming throughout. The cinematography definitely matches this, as most of it is in the dark and some shots are quite difficult to see. The film’s ending indicates hope, however. We see the girl in the pink coat (Ferrara’s daughter) walking in the street, followed by another shot of two women dancing. The visual clarity increases dramatically in this scene. All of sudden, we can see everything that’s going on. The shots are bright, vivid. Because the film concludes on this moment of optimism.

I feel like Ferrara’s work is becoming more abstract as time goes on, with this and Siberia. And I’m here for it, 100%.