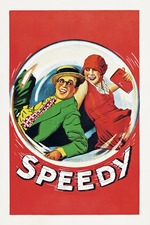 Harold Lloyd delivers another affable, exciting comedy with 'Speedy,' featuring daring and dangerous chase sequences and stunts, a lovely and dedicated romance, a hearty amount of slapstick and even a blink-and-you'll-miss-it cameo from Lou Gehrig, right after the legendary Babe Ruth's appearance. It's a film that's akin to traveling back in time, as most of these sequences are striking in their authenticity of the time - sprawling streets, bustling roadways, dapper clothes, and even wildly packed-in crowds at a Yankees game. It's a real sight to behold.

There's a lot of character and delight here, too; I loved watching Speedy and his co-workers attempt to juggle their jobs while also listening for the score from the ball game, and Speedy's day with his love, Jane, at Coney Island is full of love, circumstance, oddball moments and misunderstandings. I also got a big laugh out of the crowd assembling while Speedy messes with the door on his cab, laughing at his attempts, applauding him once he succeeds before dispersing. There's so much personality dripping in these shots and moments, especially for a silent film. It may not be Lloyd's strongest film, in my opinion, and there are certainly some green screen issues, but other than that there's still so much left to appreciate and enjoy.

The Dark and the Wicked