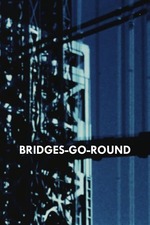 Like most people (including the diehard American independent cinephiles who can wax lyrical about Mekas, M. Deren, the Cass, and Brakhage), I am woefully underinformed on the cinema of Shirley Clarke. She was an American independent filmmaker who was famous in spurts in her life, but reached neither the in-life fame nor the post-life deification of the aforementioned directors. We're only NOW just beginning to see what a brilliant, shrewd, endlessly fascinating figure she was.

Here, Clarke shoots hypnotic footage of the 1958 Brussels World Expo. The film, only 3 minutes in length, is repeated twice—each time with different music. The first time we hear the soothing-haunting sax stylings of Teo Macero, the second time we hear the dystopian bleep-bloops of electronic composers Bebe & Louis Marron (The Forbidden Planet [1956]). City symphony and city nightmare. Clarke, an adament musicphile, reminds us how much scores matter to establishing tone, rhythm, and synchronicity. The unforgettable Portrait of Jason, as well as this promising early documentary short, make me excited to delve further into Clarke's freejazz cinema.