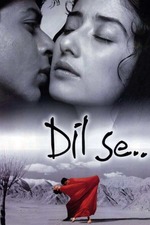 Has there ever been a more memorable movie line than "Don't you think our love is more important than your terrorism?"

One of the most jittery, restless movies I've yet encountered. It refuses to settle into a genre for too long—it starts as Umbrellas romance, then proceeds to the musical aesthetics of a 90s music video, followed by dalliances into thriller-horror-action-adventure-warfilm—until it comes crashing down in an ending so emotionally satisfying and explosively nutty that Sam Fuller couldn't have come up with a better one. I think part of the reason why the delirious Dil Se... works is its refusal to accept "reality" and "fantasy" as two separate concepts. Even during dance sequences on trains, we still snake through a forest of Indian trees and kids running along, to remind us always of a.) the rural poverty that Meghna the rebel-fighter is striking against, and b.) the crucial Indian setting that would otherwise bog down this extremely long, operatic, over-the top wail of many emotions. I don't know much about Indian politics and the political climate, but one definitely gets a Romeo and Juliet vibe from the tensions between the majority, Hindi know-it-all reporter—and his forbidden love, the rural-Northeastern-pro-independence rebel with a cause. The observations made about India (the government's hypocrisy in promising citizens autonomy and independence, when all the citizenry gets is a life of glorified serfdom) are rooted in an almost Eisensteinian sense of disreality, distortion, hip cartoon acting. There is an awe-inspiring sense of historical and social truths communicated through all the ostensibly escapist dance-dance and cry-cry. It's why Demy was able to nail French buttoned-up manners in Cherbourg, Minnelli nailing American opportunism and greed in his musicals (and especially Long Long Trailer), and Berkeley conveying the 30s white modernist obsession with geometry and science in art in his choreography for 42nd Street-Footlight Parade-Gold Diggers-Dames. A similar principle is at work in Mani Ratnam's Dil Se...

What especially impresses me about Mani Ratnam's uncogested# visual style is his total respect of the integrity of characters talking-moving-laughing-loving in an uninterrupted space. I love to see a rapport between two well-cast actors develop naturally, and Ratnam does too, because his visual style—never reverting to conventional shot-reverse shots, instead going for a sort of quasi-classical Hollywood long-take-approach that records a conversation in its entirety, with dialed-down montage—proves his wisdom in placing Actor high on his list of priorities. Note that the first encounter between the radioman (a spastic, all-over-the-place Shahruk Khan) and the terrorist (a grounded, undeclamatory Manisha Koirala) takes place in a magical long take which gets better and cuter the longer Ratnam refuses to cut. There's so many of these subtle but crucial moments peppered throughout this schizophrenic odyssey into emotion. This approach—let the actors speak quietly and intently in narrative situations that become increasingly hysterical—culminates in a fascinating 360-degree pan around the two lovers, yelling at each other that the other doesn't understand what s/he wants, the whole world seeming to spin around them while they remain anchored in place, lost in their own thoughts and about to succumb to their own violent passion for each other, above their purported cause (the fighter's struggle for an independent India, the reporter's need to deliver the truth to the masses). Such a whirligiggy technique would seem cartoonish in any other instance but this one. Indeed, De Palma gets a lot of shrill flak for it, because it rarely comes off as anything more than garish cinematic flexing of the muscles. Not so with Ratnam's pan, which constantly cuts in between itself while, paradoxically, maintaining the rhythm and the flow of this super-charged scene. Very exciting stuff.

# — I say "uncongested" with the insistence that none of the extemporaneous dance-numbers "congest" the narrative, such as we Westerners understand it. They are exactly the same, thematically, as the emotional reservoirs that Ratnam uses to conjure up scenes of Khan being pummeled into a pulp in one of his many fist-fights (Action), Koirala remembering a vicious and truly unforgettable trauma that she endured when she was a young village girl (Melodrama), and Khan running after a rebel-fighter who knows his beloved, and who is forced to take cyanide after being captured by the authorities (Thriller). In other words, the musical scenes are just another expression of what this film keeps saying over and over: imperfect human relationships are the fundamental basis of any socio-political configuration, and to forget this, and to forget the humanity of the person next to you—well, in Ratnam's view, it quite literally equals death to the forgetter.

Witness for the Prosecution