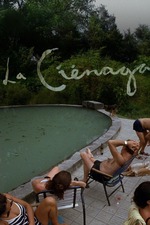 Ennui has never had such a definitive evocation as in Lucrecia Martel's La Ciénaga. It is one of the most narratively disjointed and off-kilter cinematic experiences I've ever endured. Lurching between mind-numbing listlessness and unprovoked action, Martel termite-eats her way through the doldrums of life unlike anything that's been evoked on the screen. The picture is about waiting, waiting for something, anything to happen. It is perpetually on the precipice of turning into a David Lynch nightmare, which it does so impercetibly that it takes several viewings to unpack all Martel's three-dimensionality. Characters (such as they are) are so hush-hushed in Martel's swampy sound-land-scape that we can't tell which character is who and how people are related to one another.

And this is nothing to say of the sound, which redefines what it means to exist in a space. As Martel says, filmmakers who don't care for sound work within the illusory two-dimensions of the screen. Filmmakers who do (Tati, Lynch, Tarkovsky, and Martel) realize the full-potential of cinema to drown the spectator in a mind-opening self-awareness of their periphery space. These filmmakers bog the viewer in emotions they've never felt. For Tati, it's humanist comedy. For Lynch, it's surrealist horror. For Martel, it's the essence of the unheralded ripples of life itself, the dull moments where no action happens. What a brave filmmaker to work exclusively in this domain.