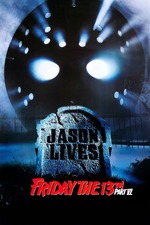 It Is Happening Again: Hooptober 6 (Haunting: 15)

It's probably not the best practice to skip from film 1 to 6 in a series, but there was no franchise I was in a good position to fulfill the 6th movie criteria with and I didn't want this Hooptober to be overloaded with a single franchise. As a result, I can only talk about the evolution between two far points -- somewhere Jason got his proper identity, became substantially more powerful than the ordinary villain from the first film, and the tone stopped trying to scare and turned purely to silliness.

That would be fine if it was fun, but it largely isn't. It's definitely a movie that desperately wants to be fun; there are several cheesy jokes thrown in that feel like overdone winks and nods to the audience ("Why'd they have to go and dig up Jason? Some folks sure got a strange idea of entertainment!" said straight into the camera). It never seems to know how to actually be fun, though. Jason's movements read as wooden, certainly never intimidating and menacing while also not becoming silly enough to match the rest of the film. Eventually it occurred to me that his workman clothes are perfectly appropriate. Here, Jason is disinterested and passionless. He's clocking in, killing some people who won't stay out of his camp as quickly as he can manage, hoping to go home a little earlier than last time. Yes, Jason Lives, but sometimes he wonders why. He thinks about Pinhead. No matter how bad things are around him, Pinhead is always having fun. Next week he's gonna put in an application for the Cenobites. He needs to find something where he's not just watching the clock all day. The move isn't going to be easy; he's spent all his time in this little wooded camp and the Cenobites require their employees to be on-site in another dimension. It'll be worth it, though. Jason will find meaning.

Oh yeah, I was writing a review or something. Point is, this movie seems to think that we just want to watch people die and as long as some people scream and some blood is spilled, that's what fun is. Well, my horror/slasher ratings floor remains in effect, keeping this fairly watchable even when I found absolutely nothing worthwhile about it in particular, compared to every other movie in the genre. So maybe those insulting assumptions that I made up aren't completely wrong.