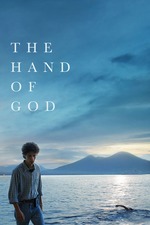 The titular “hand of god” manifests in several different ways in Paolo Sorrentino’s film. Once I learned that Diego Maradona would feature prominently in the story, I knew the hand of god would refer to his infamous goal. The characters in a Hand of God are obsessed with football, and, more specifically, with Maradona signing on with the Naples football team.

Filmmaking is the second obsession of this film: the protagonist’s brother, Marchino, is unsuccessfully trying to be an actor, and the main character, seventeen-year-old Fabietto, decides he wants to be a director. At one point, a character quotes Federico Fellini as saying that film is a good distraction from reality, because reality is lousy. As a director, Fellini’s ability to distract from reality is changing people’s reality, which also gives him, to a certain extent, the hand of a god.

The first half of this film is funny as hell, with a mother constantly playing pranks, a grandmother constantly telling everyone to f*ck off, an aunt constantly being naked, and a sister who’s constantly in the bathroom (no, seriously. the entire movie). Hand of God features Italians that know how to live, laugh, and be loud. Sorrentino perfectly captures the energy and rhythm of Fabietto’s family.

The second half of the film is much darker, but it also has moments of grace, humor, and the “hand of god” finding ways to help a young man begin moving forward. Paolo Sorrentino can go so big, with outsized characters and awe-inspiring settings, but he seems in complete control of his films at all times.