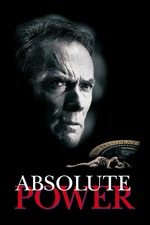 “Luther, he was my President. Right or wrong.”

Whoever scheduled Absolute Power as the movie to end the week on RTÉ One... I see you.

Of course, the monstrously evil President of the United States featured in Absolute Power felt at the time like an extrapolation of Bill Clinton. Of course, both the book and the film of Absolute Power predated the Lewinsky Affair, but Clinton had already faced allegations of sexual misconduct and (somewhat less credible) accusations of murder and mayhem. However, the film did feel very topical in the context of late nineties. The nineties were truly a more innocent time.

Of course, twenty-three years later, it’s impossible to watch Absolute Power without hearing a future President of the United States boast, “I could stand in the middle of Fifth Avenue and shoot somebody and I wouldn’t lose any voters.” It’s a strange sensation, in hindsight. There are certainly aspects of Absolute Power that have aged in uncomfortable ways four years into a Trump Presidency. In that it’s a lot easier to believe the apparatus of state bending to the whims of a morally vacuous leader.

I do wonder how the more insane seasons of 24 might watch after the previous four years. Assuming Trump is actually gone when the results come it, it really does feel like there’s a strange stain left on the office that gives pulpy and trashy stories about it a sharper edge.

“Oh Christ, father. What have you done?”

This is an interesting recurring motif in Eastwood’s movies from the nineties on; the alienated adult child, especially a daughter. This is one of the more interesting aspects of Eastwood’s filmography. Eastwood typically plays paragons of masculinity, which makes sense. He is a bona fides screen icon. However, Eastwood never really gets credit for how he deliberately complicates these figures, making them less than just ideals.

Eastwood’s films return repeatedly to the idea that being that sort of masculine ideal - the efficient professional, the wandering rogue - takes a very real and vey tangible toll on the people who get caught in his orbit. It very deliberately complicates Eastwood’s screen persona.

“Why take a slug out of the wall when there's one stuck in her head?”

On an unrelated note, something I miss from nineties movies that was largely killed by the arrival of CSI on television: the police procedural investigative subplot in a pulp thriller. There was a time when it was a novelty to hear detectives talk about ballistics and blood splatter, in large part because it seemed like a novelty to actors and writers.

Those sorts of scenes disappeared, shortly before the mid-budget adult thriller itself disappeared.