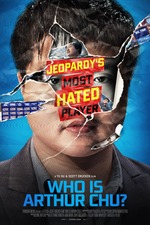 Who is Arthur Chu?

I just saw the poster "Jeopardy's Most Hated Player" and decided to watch it on that alone, I was intrigued to find out what made someone become so notorious on a show like Jeopardy that it would warrant a whole documentary.

Unfortunately semi-spoilers here (although you find that out within the first 10 minutes) the reason for his notoriety is not that he was able to cheat the system or anything and therefor got hate. It was merely because he used some mindgames with (very clever) game-play that made it harder for his opponents. And a big reason because he was Asian and a bit overweight winning time and time again. Let's be real if he looked like Ryan Gosling and he was this clever, he'd pretty much be a sex symbol.

It's mostly the first 20 minutes that deal with the whole Jeopardy ordeal and all the hate he got from it (and even to this day seemingly), it's referenced throughout ocassionally but the film is mostly about Arthur Chu and what he's doing now more so than anything Jeopardy.

So what is Arthur Chu doing now, well he's trying to make a living out of being a public speaker and journalist using his fame fighting against injustices, his primary focus in the documentary is against sexism.

It's mostly a day in the life of type of doc. There are some interesting topics such as Arthur Chu's family background that they could have dug deep into, the fact that Arthur was seemingly embarrassed by being Chinese growing up is mentioned but no in depth detail as to why or how that would express itself.

Don't get me wrong Arthur Chu is a likeable, smart and interesting enough guy but in the end the film does come across as self-promotion.

You Should Have Left