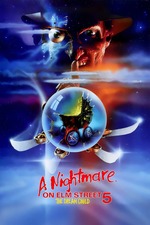 A Nightmare on Elm Street: The Dream Child

A real mix of good and bad, A Nightmare on Elm Street 5: The Dream Child has some of the series' best visuals and a whole bunch of nice concepts but it simply doesn't work. The nightmares are some of the best imagined in the franchise but everything else somewhat falls apart. Pretty much any sequence without dreams is either atrociously put together or just plain boring. The supporting characters are terribly annoying and their interactions are incredibly unrealistic.

The plot itself is nonsensical to the point of annoyance, but I can see potential. Returning to the concept of parental sin is nice, especially as it has a new angle to examine it from, namely the child of one of Freddy's victims. However the execution falls flat, being half-baked and unfinished by the film's end. The discussions on abortion and adoption lack subtly also, though I appreciate the attempt to bring much-needed depth.

The focus on parental pressure, and the generational divide built on lies, is actually refreshing because the film is so goofy in tone. Whilst Freddy's one-liners make my day, The Dream Child probably uses comedy too much, to the point where it becomes flippant. There's also a whole section set inside a comic that is just long, childish, and not very frightening. Stuff like this makes The Dream Child a tonal mess. The film is repeating aspects of Dream Warriors, mostly by dragging Freddy's mother back into the story as well as the Christian ideas, but it lacks the consistent tone of that film.

The Dream Child is alternately goofy and truly nightmarish, and in a film attempting to draw upon legitimately good ideas it just ruins the film. There's many things to admire about The Dream Child but it is sadly a failure overall.

A Nightmare on Elm Street Ranked