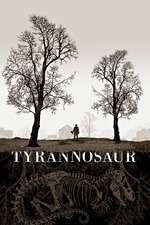 Tyrannosaur was filmed in the city I live, in estates I know. A few scenes were shot a few streets down from where I live, I must have walked that way a thousand times. I know this place. I'm not claiming to have lived a life anywhere near as bleak as this film, but I do see reality in Tyrannosaur. I've found needles in the ginnel next to my house, visited acquaintances who can't afford a bed to sleep on, and can name far too many people my age who've taken a dark path in life. I remember kids on my street who used to play with broken glass. Whilst my parents brought me up in a caring and stable household, it's strange to contrast that with the world around me. All of this makes Tyrannosaur a film I find myself having a weird connection to.

This is a film with no pure characters. Most are bad, and some are good, but there are none who have never committed a wrong. Tyrannosaur is deeply unpleasant, a film of abuse, and it strips away so much bullshit to tell its harrowing story. The story of two lost souls who find each other is heartwarming in the most bittersweet way, because they go from having nothing to having almost nothing. In a world full of cunts there's only little comforts, like finding a secondhand suit that fits or drinking in a dilapidated pub (my local, now shut down). The Favourite should have given Olivia Colman her second Oscar, because she deserved her first for her incredible work in Tyrannosaur. She is heart-wrenching to watch, playing a saviour, a victim, a friend, a drunk, a betrayer, and making each the same character. Tyrannosaur is a monstrous work, brutal and unforgiving, and yet it has a heart. Modern Britain contains a lot of pain, but Tyrannosaur finds the tiniest something that finally doesn't hurt.