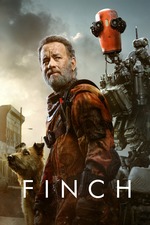 I suppose one could spend their time trying to shoehorn this film into any number of films that might possibly serve as it's inspiration, or that it feels helplessly reminiscent of. Best you will come away with from that endeavor, imo, is some kind of mash-up. In truth, one of the real strengths of this film is finding a way to carve its own distinct path into its apocalyptic setting.

The story follows a dyjng man, living in a desolate future where the sun has made the earth uninhabitable, who creates a robot to care for his most beloved companion, a dog, after he passes. This premise becomes a vehicle for an astute, and often fun character drama. If you are expecting a grand story here, this might disappoint. This is a gentle, spacious, simple exploration of a man, his dog, and the robot he gives birth to.

The context for the relationship with his dog, Goodyear, is strong enough on its own, a small bit of information that does a lot of the heavy lifting. It's his relationship to Jeff though that provides a place for this relationship to land. In its own off kiltered way, Jeff represents a kind of coming of age story. At the same time he represents something more. The gradual bond between the man, played to perfection by the perfectly casted and always wonderful Hanks, and the robot, frames the story and gives it direction.

As the film's title suggests, the story's ultimate concern is for Finch and the important life lessons he can glean from these relationships, from his struggles, Lessons about life, humanity, relationship, and meaning. If you find yourself too busy working out this mash-up of infkuences, pay closer attention to what this film is doing all on its own, as the emotional punch it delivers just might surprise you.