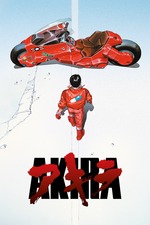 It's about time I got around to watching what might be the most legendary anime film ever. In many regards, it certainly deserves that status. The visuals are incredible, with its 24fps animation, almost nonstop action, explosions, body horror, teddy bear hallucinations, the parallax skyscraper backgrounds looming over the streets conveying the immensity of the city. The score is beautiful - I would have expected something a little more intense to fit the grotesque violence on display, something like one of Chu Ishikawa's more intense scores perhaps, but the relative calm of Shôji Yamashiro's score is oddly fitting.

In spite of all the spectacle, the film still aims for a pretty high concept story, which I can respect even if it ultimately doesn't make a ton of sense; I've heard that a lot was lost in the adaptation from manga to anime, which isn't surprising. Sadly, I'm assuming the characterization was part of that loss, as the characters unfortunately didn't do much for me for the most part. Kaneda only ever seems like a cocky wisecracker who jokes around even when he's trying to kill his best friend who's gone mad with power; Tetsuo is only given enough characterization to explain why his newfound power goes to his head so easily; we don't really learn much of anything at all about Kei; and Kaori is mostly treated as merely a plot device to illustrate Tetsuo's incompetence and then ultimately discarded in a brutal manner, which I found pretty gross (for reasons other than the method, I mean).

Despite the glaring flaws, though, the imagination on display is breathtaking and plenty of moments are an absolute joy to watch. I'll definitely be revisiting this in the future (and reading the manga).