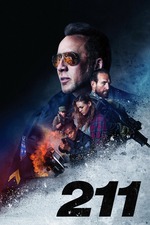 Unwatchable even by the subterranean standards of a direct-to-video Nicolas Cage thriller, director York Shackleton’s “211” is the kind of low-grade schlock that leaves you with a newfound respect for the basic competence that most bad movies bring to the table. Not even the opening credits feel totally credible, as they insist the film is “based on a screenplay” by the filmmaker, a point of attribution that doubles as a brutal self-own.

These are but a few of the many haunting questions that loom over “211”: “What?,” the more existential “why?,” and of course “wait… how the hell did this movie about war profiteers in Afghanistan suddenly become a heartwarming story about a black teenager who learns how to stop worrying and love white cops?”