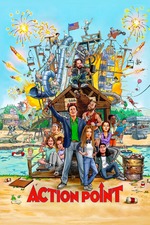 Johnny Knoxville may be one of the world’s foremost scholars of self-inflicted pain, but he’s never subjected himself (or us) to anything even half as excruciating as “Action Point,” a dismal new comedy that will leave you longing for the relative artistry and sophistication of the “Jackass” glory days. Because, as much as this might look like a “Jackass” movie — as much as it might provide a ridiculously great premise for a “Jackass” movie — this joyless aberration is most definitely not a “Jackass” movie. It feels generous to call it a movie at all.

The basic idea should have been a total slam dunk. Inspired by New Jersey’s famously dangerous “Action Park,” a deathtrap that was forced to close when the owners were buried in an avalanche of personal injury lawsuits, “Action Point” was never going to be anything more than a masochistic playground built on top of a flimsy plot. That’s all it had to be, and that’s all it should have been — 85 minutes of Knoxville and his friends abusing themselves across a shoddy re-creation of the most unsafe amusement park America has ever known.