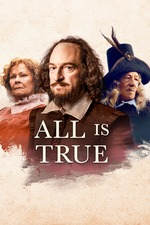 Kenneth Branagh’s “All Is True,” a heavily fictionalized biopic about William Shakespeare that focuses on his return to Stratford after his retirement, is the lifeless story of a man who gets to realize Jean-Pierre Melville’s greatest ambition: To become immortal, and then die. By the time this curious but inert character sketch of a movie begins, Shakespeare is already halfway there.

Convincingly embodied by Branagh, who squeezes his head under a prosthetic hairline in order to bring his lifelong obsession with the Bard to its logical conclusion, the poet and playwright is first seen as the Globe Theatre burns to the ground behind him, his livelihood going up in flames. A stage cannon has misfired during the debut performance of “Henry VIII” (also known as “All Is True”), sparking a blaze that ends Shakespeare’s career and sends the overachieving scribbler back to his wife and daughters to explain what (and who) he’s been doing all this time in London. As the smoke clears, he’s forced to reckon with the fact that the scope of his writing dwarfs the smallness of his life, and that work is only part of what constitutes a legacy. A legend in his time, but a ghost in his home — think of him as a Disney Dad in a well-laced doublet — Shakespeare returns to Stratford in order to fill the void he’s left behind.