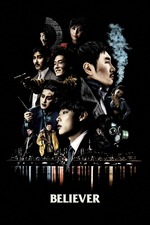 A massive hit in its native Korea, “Believer” is a wild and boisterous crime drama that’s evenly split between romanticizing the back-and-forth between cops and robbers, and lamenting the pointlessness of that endless pursuit. Directed by Lee Hae-young, a rising talent whose distaste for half-measures was already on full display in his previous work (e.g. 2015’s “The Silenced”), the film espouses a violent commitment to both sides of that coin — the fun of the chase, and the hollow pain that someone feels when it finally catches up to them.

Much of this recklessly entertaining movie is so giddy with violence (and so many of its characters are cartoonish psychopaths) that it can be easy to forget the melancholy tone of the opening minutes, or the sadness that creeps into the margins after that. If Lee never quite convinces us of anything, it’s because he fails to put those two disparate modes into meaningful conversation with each other, even when people who represent different sides of the law are forced into direct confrontation, or to go undercover.