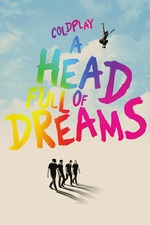 Coldplay: A Head Full of Dreams

Here’s a Coldplay documentary so charming and sincere that it will make you feel bad about mocking the band’s music for the last 16 years (aside from intermittent appreciation for what Brian Eno got out of them on “Viva La Vida,” of course). Mat Whitecross’ “Coldplay: A Head Full of Dreams” is more than just a look inside the third-highest grossing concert tour in history, or an intimate portrait of one of the 21st century’s most successful rock bands; it’s also an infectiously upbeat biography of four blessed friends (five, if you count their manager; six if you count Whitecross himself), who conquered the world on the strength of their belief in themselves and each other. In other words, this feature-length victory lap should be utterly insufferable from start to finish. It isn’t.

At a time when the world feels like it’s resting on the edge of a knife, there’s precious little patience for a movie about handsome nerds who meet in college, get rich and famous in their early 20s, and then steadily continue to get richer and more famous from there. Who wants to pay $15 to watch someone else meet Beyoncé? For diehard fans, watching this was always going to hurt like heaven, but it’s definitely a riskier proposition for the rest of us. When this critic recently celebrated a wave of “nicecore” filmmaking, Coldplay weren’t the ambassadors he had in mind. And yet, perhaps they should have been?