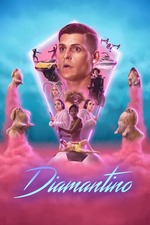 “Diamantino” is nothing less (and so much more) than the movie the world needs right now. Co-directed by Gabriel Abrantes and Daniel Schmidt, this winningly demented 21st century fairy tale centers on a beautiful, child-like soccer phenom named Diamantino who reacts to a devastating World Cup loss by adopting a Mozambican refugee who claims to be a teen boy but is actually an adult lesbian on an undercover mission from the Portuguese government to investigate a money-laundering operation run by the athlete’s evil twin sisters. Also, there’s a mad scientist who’s trying to clone Diamantino in order to create an invincible super team capable of stoking national pride and “Making Portugal Great Again.” Also, there are giant puppies. A lot of them. A litter of Pekingese the size of double-decker buses. And that’s just the basic set-up.

Unfolding like a blissful cross between Guy Maddin’s lo-fi surrealism and Jeff Koons’ candied indecency — the directors have cited “an anarchy of references” — “Diamantino” is a frothy and infectiously sweet film that bubbles with the madness of the modern world, and dares to suggest a way forward that’s as simple as the moral at the end of a children’s story (hint: it has something to do with choosing love over apathy or exploitation).

Hotel by the River