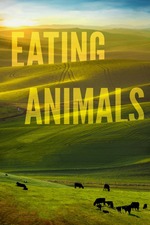 People often don’t know what’s good for them. Most of the time, the disconnect can be attributed to a lack of perspective — give someone a short-term solution, and they’ll happily create a long-term problem. It’s a phenomenon of human nature that capitalism has been all too happy to exploit, and thanks to recent “advances” in factory farming, the world is now literally eating itself to death.

So goes the premise of Christopher Quinn’s “Eating Animals,” an urgent but uncertain documentary that amplifies and expounds upon the argument Jonathan Safran Foer laid out in his 2009 book of the same name. That idea explains how we went from living off the land and killing only what we needed to where we are today: Breeding so many pigs that farmers in North Carolina are forced to create Pepto-Bismal-colored pools of “fecal marinade” behind their properties, these pink lagoons of stink and poison seeping into the greater water supply around them. It explains why we inject our cows full of so many antibiotics that their udders burst and the pus drains into the milk we buy, and why chicken farmers suffering under the thumb of their industry’s tournament system are only satisfied with their Godzilla-sized birds when their bodies grow too big for their hearts to sustain.